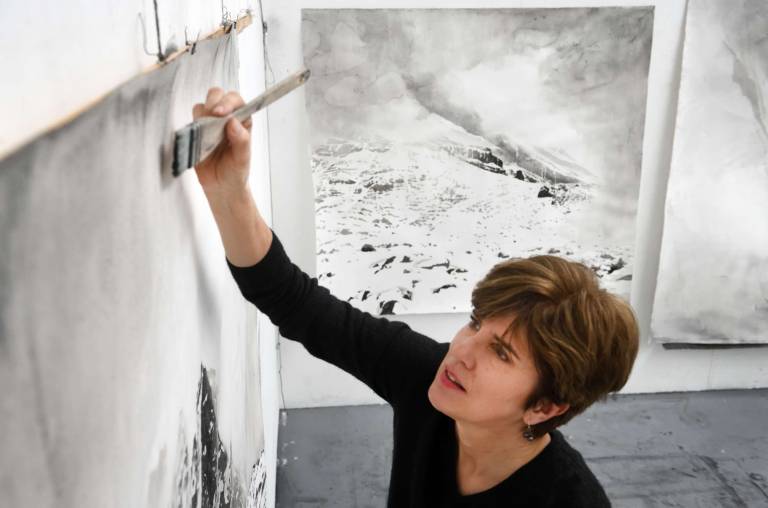 Emma Stibbon RA works primarily in drawing and print on paper depicting environments that are undergoing transformation including the polar regions, volcanoes, deserts, coastal and urban locations. Her approach to landscape is driven by a desire to understand how human activity and the forces of nature shape our surroundings.  She does this through location based research often working alongside geologists and scientists, and in the studio where information is transformed into large scale drawn and printed artworks.
Many of the environments and landscapes I depict are changing rapidly. As an artist, I feel committed to representing the impact of these changes, be they natural or human. My impulse is to draw, in an effort to act as a witness.
Working from her studio at Spike Island and Spike Print Studio in Bristol, Stibbon self publishes the majority of her prints. Stibbon's work is represented by Cristea Roberts Gallery, London, and Galerie Bastian, Berlin.
Photo credit: A. K. Purkiss
Biography

Emma Stibbon studied Fine Art BA Hons at Goldsmiths, London and Research Fine Art MA at the University of the West of England, she is Senior Lecturer at the University of Brighton. In 2019 she was awarded the Queen Sonja of Norway Print Award, Svalbard, High Arctic. In 2016 she was Artist in residence at the Josef and Anni Albers Foundation, Connecticut and was Hawai’i Volcanoes National Park Artist in residence. In 2013 she was Artist Placement in Antarctica organised by the Friends of the Scott Polar Research Institute and participated in the Arctic Circle.org expedition to Svalbard in the High Arctic supported by Grants for the Arts, UK. In 2010 she was awarded the Derek Hill scholarship at the British School at Rome, other projects include the Stiftung Federkiel residency at the Spinnerei, Leipzig, and the 4th International Gyumri Biennale, Armenia. Her work is held in private and public collections including the Stadtmuseum, Berlin, Bristol City Museum and Art Gallery, The Laing Art Gallery, Newcastle, the New Art Gallery, Walsall and the Victoria and Albert Museum, London.
In 2013 she was elected Royal Academician.
Click to download a full CV